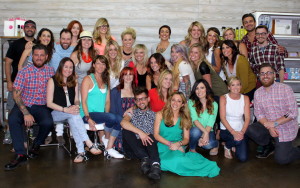 Thankfully, the management at Cortello had a heart and ushered the woman back to a semi-private room to perform the emotional task. Laura (not her real name) handed a smartphone to one of the salon staff to record the event. Her plan was to post it to YouTube so others could gain strength from her decision. And maybe, for her it was, in some way, therapeutic? Tears started at the sound of the electric razor (from everyone involved). Laura talked about her past, her family, the treatment, and goals not yet realized. It was an emotional, significant moment for the stylist, the customer, and the impromptu videographer. It was a true life-changing experience for everyone.

Afterward, the bill came to $0 and the stylist refused a tip.

To the staff at Cortello, I thought you handled that very well. It’s good to know that your team has a generous spirit and compassion comes free in your salon. Your small act of kindness will surely inspire others to do the same.